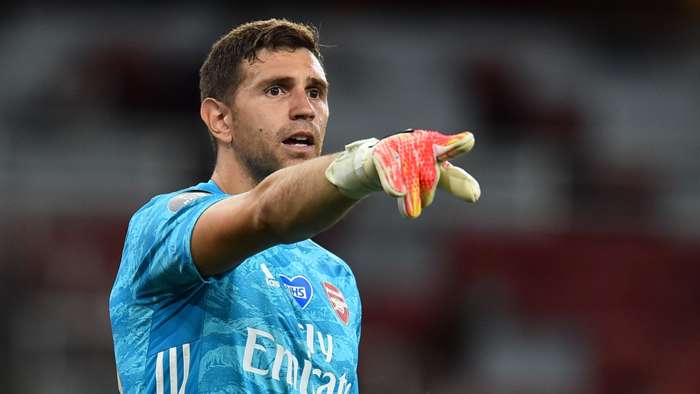 Arsenal are mulling over a second offer from Aston Villa for Emiliano Martinez.

The Midlands side submitted an offer, which is believed to be in excess of £15 million ($19m), for the 28-year-old earlier this week and have yet to learn whether it has been accepted. Their first bid for Martinez, which had arrived earlier in the summer, had been rejected by the Gunners.

Arsenal are believed to value their goalkeeper, who came into the side for the injured Bernd Leno towards the end of last season and played such a key role in the FA Cup success, at around £20m ($26m).

Martinez’s preference has always been to remain in north London, but he knows he needs to be playing regularly to have a chance to becoming Argentina’s No.1.

With Germany international Leno to compete with, however, it is not yet clear who will start the new Premier League season at Fulham on Saturday as Mikel Arteta’s first choice.

Martinez played in the Community Shield victory against Liverpool at Wembley just under a fortnight ago and impressed once again as Arsenal beat the champions on penalties following a 1-1 draw.

Speaking after that, Arteta was coy when discussing the future of the Argentine.

"We are in the market but there is a lot of speculation,” said Arsenal’s head coach.

“Emi has shown in the last few months what he's capable to do for this football club, I am convinced he has the level to play for us consistently at that level, he showed that today in a final.

“I cannot stop the speculation or what people write about us."

While he would prefer to stay at Arsenal as first choice, Martinez would be interested in a potential move to Villa before the transfer window closes on October 5.

Although Arsenal will reluctantly consider selling the keeper should what they deem a suitable offer arrive, they have also been in talks over extending his current contract - which runs until 2022 - during the summer.

But Goal has learnt that the fresh terms being offered by the north London club are lower than what Aston Villa are willing to pay Martinez, should he agree to join Dean Smith’s side. And, unlike Arsenal, the Villaare willing to give Martinez assurances that he will be first choice during the coming season.

Arsenal must now make a decision on their long-serving goalkeeper, who has been at the club for more than a decade.