'Arteta's got to be given money' - Arsenal rebuild needs Kroenke investment, says Keown 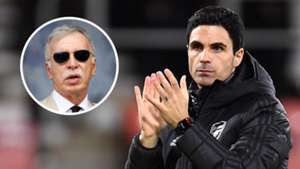 Martin Keown believes that Arsenal owner Stan Kroenke has to dip his hand into his own pocket this summer to give Mikel Arteta money to work with in the transfer market.

That deficit was largely put down to the Gunners missing out on the Champions League for a second successive season, even though they did go on to reach the Europa League final.

And with the north London club having just spent another campaign out of Europe's premier competition, the financial forecasts for the future are not good.

Arteta has already admitted that difficult decisions might have to be made when it comes to rebuilding his squad, with the futures of strikers Pierre-Emerick Aubameyang and Alexandre Lacazette in doubt.

Keown hopes both frontmen will ultimately remain in north London, however, and says Kroenke must provide Arteta with the money he needs to push through his rebuild.

"Arteta has got to be allowed to build the team," Keown told Goal . "He's got to be given money to develop.

"Do the owners need to be put some of their own money in? Obviously there are limits to the losses the club can run at, we know that with Manchester City in recent weeks and what they've gone through, but expenditure needs to be made in the team."

The futures of Aubameyang and Lacazette look set to dominate the agenda this summer, with the Gabon international now into the final 15 months of his contract and Lacazette about to enter the last two years of his current deal.

Both players insist they are happy in north London, but with talks over potential extensions on hold until the end of the season, the expectation is at least one will leave - especially if Arsenal miss out on the Champions League once again.

Keown believes it is vital that top scorer Aubameyang stays put, but has warned Arsenal about getting into a similar situation to the one they did with Mesut Ozil in 2018 when the playmaker was handed a renewal worth ?350,000 a week to ensure he didn't end up leaving for free.

"Key decisions need to be made [with Aubameyang and Lacazette]," said Keown, who was speaking as an ambassador for the FA and McDonald's Grassroot Football Awards.

"Are they going to stay or not? Do Arsenal have to face up to the prospect of perhaps losing Aubameyang? I wouldn't want to see him go, but they don't want to be held to ransom either.

"You could argue with Ozil that's what happened because at the time [Alexis] Sanchez and Ozil were two big players and they didn't want to lose both so they invested heavily in Ozil."

Arsenal do already have William Saliba arriving this summer, with a ?27m ($35m) deal for the centre-back wrapped up with Saint-Etienne last year.

He was allowed to stay on loan with the Ligue 1 outfit for the season, but the 18-year-old will move to north London in the summer to link up with Arteta's squad ahead of the 2020-21 campaign.

The arrival of the highly-rated defender will be a boost to the Gunners, but Keown still believes the club needs more reinforcements at the back if they are to challenge towards the top of the table next season.

"They need to strengthen the spine of the team," said the three-time Premier League winner. "The midfield will need to be improved and so does the defence, the results tell you that.

"It's about what sort of resources Arteta will be given and where he feels he needs to prioritise. I feel he needs to build from the back.

"All the successful Arsenal teams have had a really strong defence and although you can improve things on the training pitch, I think he has to start with personnel.

"You want dominant figures, people who want to organise and win that ball when it comes into the box. So that has to be an area where he wants to strengthen or change who he wants to start with."

Keown added: "I imagine now they are spending a lot of time watching players across the world trying to denitrify individuals that they can bring in for really good value.

"But Arsenal won't be able to shop in the most expensive shops I'm afraid. They will have to look for players who are slightly down from that, which has an element of risk.

"It's about a judgement call on your players. Very good players have been bought in the past that nobody really knew anything about. They are going to have to be imaginative in the transfer market.

"There is a hell of a competition amongst all the top teams to try to find these individuals and it's a judgement call and in the end I think Arteta will be judged obviously by results, but also in the transfer market."

Former England and Arsenal defender Martin Keown was launching the 2020 McDonald's Grassroots Football Awards, ran in partnership with the four UK FAs. To nominate a grassroots football club or volunteer go to www.mcdonalds.co.uk/awards .