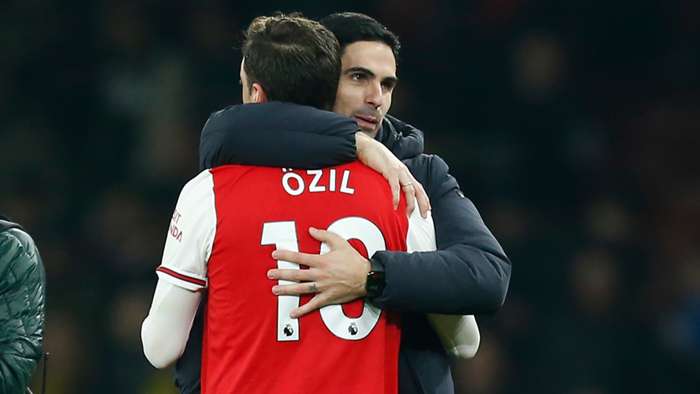 Mikel Arteta kept his cards close to his chest when asked about Mesut Ozil’s future at Arsenal on Sunday.

Ozil hasn’t made a single appearance since football resumed in June, making the squad only twice before being left out entirely with a mysterious back problem.

“He is still in the same positions he was last week or two weeks ago and we said we will manage everything internally,” Arteta said when asked about Ozil’s future.

“I have nothing to say.”

Arteta has been praised for his no-nonsense attitude with the likes of Ozil and Matteo Guendouzi in recent weeks, insisting that players need to ‘get on the boat’ if they wish to remain at the club.

The Spaniard recently said that there would always be a place for a player of Ozil’s quality at the Emirates Stadium, suggesting he could yet have a future at the club.

Questions remain around the Gunners’ defenders, with another defensive error costing them against Spurs.

After the game, Arteta was asked if such inconsistency could allow Rob Holding a chance to return to the side and impress. But, after a recent unbeaten run, he didn’t seem overly concerned.

“Obviously when you concede two goals like today… people ask why are we not playing someone else?

“Rob has done really well when we’ve demanded him to play and he will be ready to play when we demand him to do so I’m sure.”

Sunday’s defeat put another nail in the coffin of any lingering European hopes Arsenal were still clinging onto.