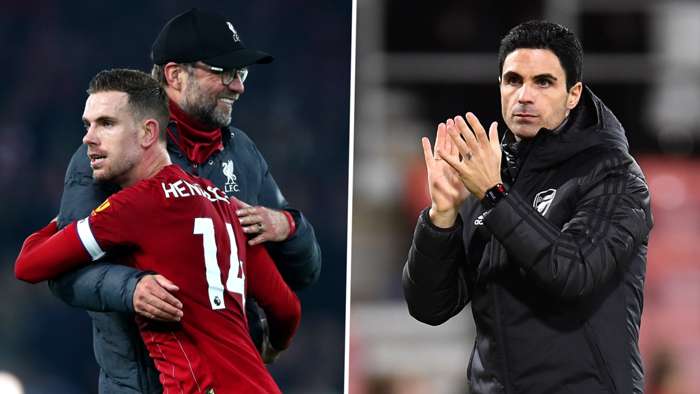 Mikel Arteta is only concerned with becoming “the best” at Arsenal, with the Spaniard looking to use the success enjoyed by Jurgen Klopp at Liverpool as a blueprint for where he intends to be in four years’ time.

Patience was shown in pursuit of domestic and European glory,with that faith ultimately rewarded with Champions League and Premier League triumphs.

It took Klopp a while to get to that point, with Liverpool in need of clever recruitment and careful guidance when he took the reins.

Arsenal have taken a similar approach in their appointment of Arteta, with a former Gunners captain returned to familiar surroundings in December 2019.

He is now a matter of months into his tenure, with there clearly much work for him to oversee,but lofty targets are being set as the 38-year-old seeks to emulate the achievements of a coach he will be sharing a touchline with on Wednesday.

Ahead of a meeting with Liverpool and Klopp, Arteta told reporters of his desire to scale similar heights over the course of a long reign in north London: “If you ask me that question in four years and we’re both sitting here and I can tell you ‘yes, we’ve done it’, I will be so happy.

“But I know how many decisions have to be right and how much support you need from the club and the people around, and how much connection you to have to generate from your fans to have the full package, and afterwards it’s football.

“The context right now is different to what it was as well four years ago and the abilities for a club to rebuild something is more limited, but it’s certainly something we have to look at and how they did it because it’s a great example.

“But we have to know that we have to do it our way, with our resources and have it in mind that the content right now is different, but we are heading to be the best and this is my only objective with this club. We have to find a way to do it.”

Arteta has a number of issues to address at Arsenal, with defensive leaks considered to be among the most pressing, but the hope is that he will force the Gunners back into contention at some stage.

Pressed on whether he thinks such ambition is realistic across the next four years, the former midfielder said: “I don't want to talk about four years in football. It's almost impossible.

“At the end of the season we are going to have to assess where we are in all terms of the club, what is the ambition and where we want to head in.

“In order to do that, either the ambition and the level is equal or it's not realistic or it's more than realistic. That's what we have to get a deal on.”

Arsenal have slipped to ninth in the Premier League table this season and have just three games left – and an ongoing FA Cup bid – in which to try and ensure that they have European football on the agenda for 2020-21.