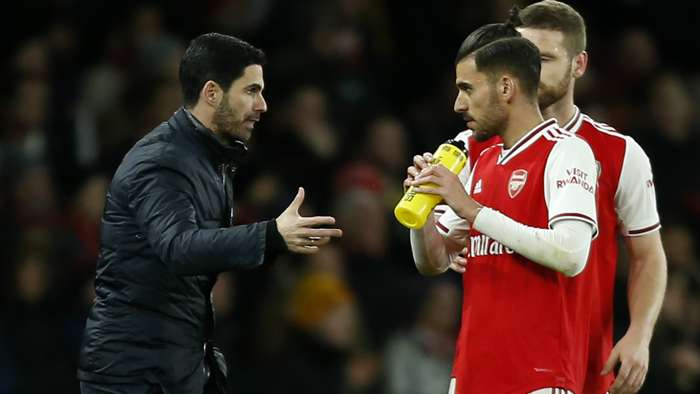 Arsenal boss Mikel Arteta is hopeful Dani Ceballos can be brought to the Emirates Stadium on a permanent basis after a series of impressive performances for the Gunners.

Injury problems have restricted his involvement, however, with a muscle tear suffered in November ruling him out of action for almost three months.

The midfielder appears to have come back from the coronavirus interruption in better shape, starting all three of Arsenal's Premier League games to date since the end of lockdown.

And while Arsenal did not include a purchase option in last summer's loan agreement with Madrid, Arteta would be happy to see his compatriot stay on beyond the current term.

"Both clubs have been in communication. I really like Dani and what he brings to the team," he explained to reporters following Wednesday's 4-0 thrashing of Norwich City.

"When I joined he wasn’t available because he had a difficult injury, but he’s understanding what we’re trying to do really, really nicely and he has big personality to play and take the ball in any area of the field and give us the continuity that we need as a team to control the games better, but as well without the ball.

"The running that he’s putting in, the tackles, every time with the interceptions, his desire to win that ball back and help the team, he’s improved so much and he looks a really good player at the moment."

Ceballos has also recently commented on his future, stating that he was more likely to stay in the Premier League or return to former employers Betis than try his luck again under Madrid coach Zinedine Zidane.

“The owner of my future next year is me. Next year I want to play and I will hardly be able to do it at Real Madrid," the midfielder explained toEl Larguero.

“Would I return with Zidane? I have to make the decision.He told me this year that the best thing was for me to leave and get experience.

“Everyone makes their decisionsand they must be respected, I have nothing against him because he has always been very clear with me.

“Betis? It is an option. I do not close the door to play in any club. I do not rule out continuing in the Premier League.”