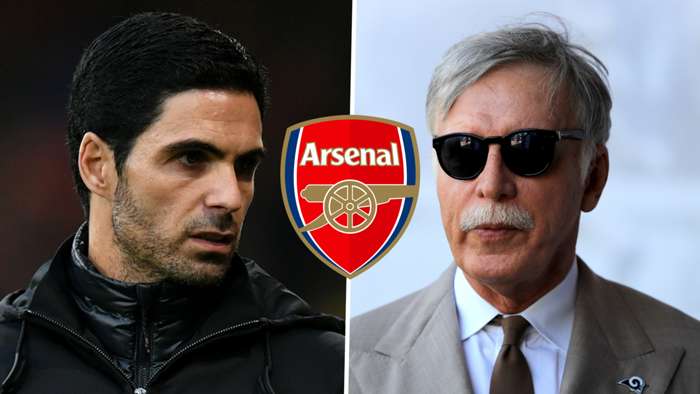 Mikel Arteta says he can pick up the phone and call Stan Kroenke directly - rather than having to send messages to Arsenal’s owner via the media.

Many saw that as the Spaniard sending a clear message to Kroenke over the need for investment, but Arteta is adamant that was not the case.

“If that was misinterpreted, it wasn’t my intention,” he said, ahead of Saturday’s FA Cup semi-final against former club Manchester City.

“We work so closely with the owners to put the plans that we need to take this club forward. Everybody has the same ambitions. We are in this together.

“But if you ask me if I know right now what I will have and how I can do it, I’m sorry but I don’t know because there are a lot of questions that we can’t resolve right now with the situation we have. One is financially, the other one is we don’t know if we will be in Europe because we have players that we didn’t know what is going to happen.

“That is the reality. It’s not about sending a message. We are all with the same objective and that’s to try and bring the club back as quick as possible to be fighting with the best teams in the country and Europe.”

Arteta added: “I speak with them the Kroenkes and I have a very good and open relationship.

“That’s why, when you mentioned about sending messages I was surprised because I don’t need to that as I have the phone and I can speak to them.

“They have been very, very supportive from the first day I joined the club, they were very much participating in the decision to bring me back here. And it’s the same with Raul Sanllehi, Vinai Venkatesham and with Edu. There is no gap or friction or anything there.”

Meanwhile, Arteta insists that Ainsley Maitland-Niles still has a future at Arsenal, despite reports suggesting he wants to leave this summer after falling down the pecking order under the Spaniard.

Maitland-Niles has started just one game since January, although he has come off the bench in seven of the last 11 matches in all competitions.

Arteta admits the midfielder does have to improve in certain areas, but says he is still part of his plans.

“I don’t discuss reports with the players because I don’t read them,” he said. “Ainsley is a player who can play in many different positions and we have discussed the things that in my opinion he can improve or adapt to his game because he has incredible quality.

“He has every quality that you need to play at the highest level, but he needs to do it in a little bit more consistent way.