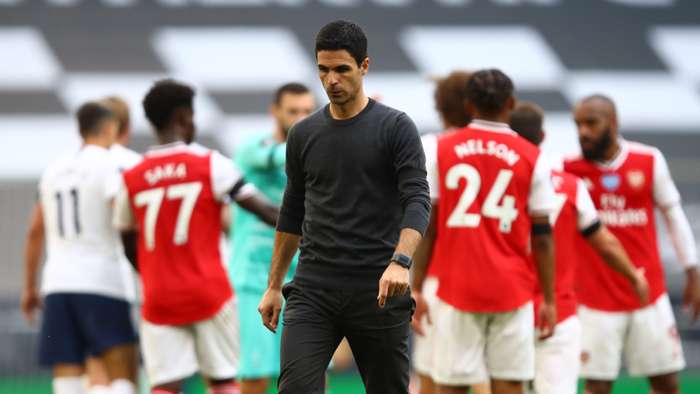 Mikel Arteta could not hide his frustration after seeing Arsenal throw away a winning position to fall further behind in the race for a spot in Europe next season.

But despite going ahead via Alexandre Lacazette's brilliant long-ranged strike, the visitors could only watch as Tottenham grabbed an instant equaliser through Son Heung-Min before Toby Alderweireld secured victory with a late header.

That defeat means that Arsenal now languish in eight place in the Premier League standings, leaving Arteta to rue a missed opportunity to make up ground on their rivals.

"I am disappointed and frustrated and really sorry for the boys first, because the way they played today and the personality they showed today, to come into this ground and show who we are, to nullify the opponents and press them high, forcing them to kick the ball long and defend in a low block," the manager told reporters after the game.

"That's exactly what we wanted to do. But obviously, if you give the two goals away that we have given against these players, it is very difficult to win a derby.

"Points wise it's a massive blow because we know the results this weekend. But we will keep trying while we have any hope. This is who we are at the moment and we will fight in two different ways - one is the league and the other is the FA Cup - to do our best to finish as strongly as possible."

Son's equaliser was product of a horrendous mistake at the back between Sead Kolasinac and David Luiz, while Arsenal's marking at the corner which gave Spurs all three points was also far from flawless.

Arteta recognised that his charges had to cut down on the blunders if they wished to fight at the top, while praising their efforts to win throughout.

"If we minimise the mistakes that we do and we keep playing like that, we're going to win many, many, many football games. Because we're going to make it really difficult for the opponent. I'm sure of that," he added.

"But these two aspects, one has to be maintained and the other one has to be avoided and it's on us. They believe in what we're doing.

"You can see how they are trying and how they are going. It's a shame because if you are able to win that well in such a big ground, on such a big stage as with today, it gives you big belief. I am gutted as well for them because they really tried."

Arsenal are back in action on Wednesday, when they host Premier League champions Liverpool at the Emirates Stadium.