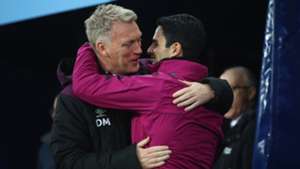 Arsenal coach Mikel Arteta says he spoke to West Ham boss David Moyes on several occasions before he accepted the role at the Emirates.

Arteta spent seven years as a player at Everton under Moyes and believes his former boss is changing with the times during his second stint at West Ham.

Ahead of the Gunners' clash against the Hammers on Saturday, Arteta also revealed the conversations he had with Moyes prior to becoming Arsenal's leader.

"I really enjoyed playing for him. I spoke with him a few times before I took the job. He's always been very supportive."

Despite a win against Southampton last weekend, West Ham only sit outside the relegation zone on goal difference as they gear up for a battle against the drop.

Arteta feels Moyes will set his West Ham side up to be physical against the Gunners and believes the Scotsman is creating a quality culture at the club.

"I worked with David for seven years. He will put a team out there that's physical and organised," Arteta said.

"The thing I admire most is the person, the values, how well he treats people and deals with creating a culture and a chemistry. He's extremely demanding."

Arsenal are currently 10th in the Premier League table, and despite having a game in hand, they are five points behind fifth-placed Manchester United.

Their battle to qualify for European football is looking tough at this stage and Arteta says the team know what missing out will mean.

"When we were in December nobody talked about Champions League. It was an impossible thing. It is not in our hands," he said.

"If we don't reach any European competition we know what the meaning of that is so they don't need any more pressure.

"They don't think too much about the Champions League or the Europa League - or the relegation zone when we were talking about that, which is a much worse pressure I believe as well.

"They are dealing with the situation. We try to help them to focus just on what they have to do on that pitch and the rest will come naturally."