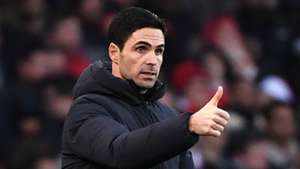 Mikel Arteta admits the families of his Arsenal players have concerns about the spread of the coronavirus.

The latest figures from the World Health Organisation (WHO) put the number of confirmed cases at 86,927 in 59 countries, with 2,976 people killed.

Sporting events have been affected as countries take measures to contain the outbreak, with Swiss Super League and some Serie A fixtures having been postponed this weekend.

Matches in England have not yet been disrupted but, with 23 confirmed cases of the disease in the UK as of early on Sunday, there are growing concerns that competitions could be impacted.

Arsenal head coach Arteta insists there is no great anxiety within the club but accepts the players' families, particularly those from abroad, are worried.

Arteta also made it clear the club are following advice from authorities as they prepare for Monday's FA Cup fifth-round meeting with Portsmouth on Monday.

"[We are] not anxious," he said. "Obviously, we read the information, it's all the time in the media.

"Our families are concerned. We have a lot of foreign players with foreign families in different countries so it's something that is on a daily basis.

"The club and the authorities are in contact every day. We are following all the instructions from the club doctor.

"So far, the protocols we have been doing are enough but obviously don't know to what stage it is going to develop.

"We've seen in other countries the difficult decisions they have to make around it to protect the situation, so we have to wait and see and be guided by them."

Arsenal endured a difficult week as they exited the Europa League following a shock 2-1 home defeat to Olympiacos on Thursday, which saw them lose the last-32 tie on away goals.

Arteta is now hoping for a long run in the FA Cup to bring some positivity to the Gunners' season.

"It's really special," he said of the competition. "It's probably one of the nicest games and days of the season when you play the final day in England, at Wembley, nice weather and an incredible atmosphere.

"And you know, it's a trophy that's been very much linked with our history. So, we want to continue to be attached to that, knowing that on Monday night in Portsmouth, it will be tough."