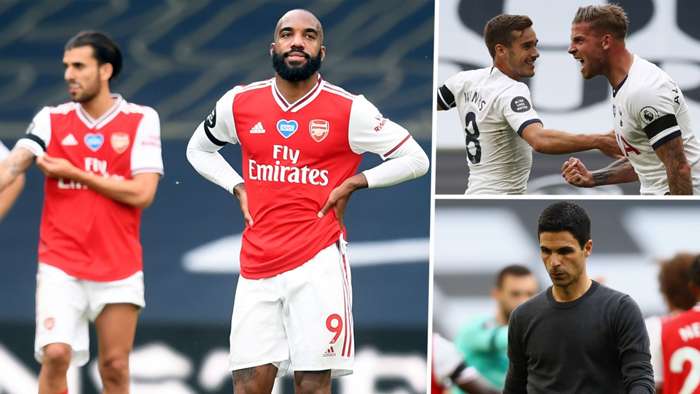 Arsenal will be kicking themselves all the way back down the Seven Sisters Road.

It isa defeat that leaves them ninth in the Premier League, two points behind their neighbours with just three games remaining and on the verge of missing out onEuropean qualification for the first time in 25 years.

It was also a defeat all of their own making.

Having gone in front in the first half thanks to Alexandre Lacazette's stunning strike from distance, they gifted Spurs an equaliser moments later when Sead Kolasinac misplaced a back pass and allowed Son Heung-min to race clear and score.

And then having dominated the majority of the second half and seen Pierre-Emerick Aubameyang rattle the crossbar, more slack defending saw Toby Alderweireld head home the winner from a corner with nine minutes remaining.

It was a hammer blow for Arsenal in their attempt to land a Europa League spot for next season, and a clear sign to Arteta that even though things have improved defensively in recent weeks, there is still a lot of work to be done - both on the training field and in the transfer market.

Since the Spaniard arrived in December, Arsenal have now dropped 15 points from winning positions - more than any other side in the Premier League.

Nine of the 17 goals they have conceded under Arteta have also come in the 75th minute or beyond, which is a perhaps a sign that the intensity that he is demanding from his players is taking its toll late on.

There is no doubt Arsenal are improving under Arteta and heading in the right direction, but until they cut out the errors at the back they will be unable to challenge towards the top of the Premier League.

Despite arriving on the back of such a good run of form, Arteta’s side started the game slowly, with Lucas Moura testing Emiliano Martinez inside the first 30 seconds after being gifted too much space.

Having been so solid defensively at Wolves in their last away game, Arteta’s side looked very edgy in the early stages, with Luiz and Kolasinac particularly sloppy.

The visitors had another let off when Harry Kane failed to get enough height on his lob to beat Martinez after he had ghosted in behind Luiz and been picked out by Lucas' pass.

Arsenal were struggling to get going, but some good play by Hector Bellerin down the right suddenly presented Aubameyang with a chance, but the Gunners’ top scorer got his finish all wrong.

That seemed to wake Arteta’s side up, however, and they went in front on 16 minutes when Lacazette thumped a thunderous shot into the top corner from just outside the box.

Having gone 18 months without an away goal in the Premier League, the France striker now has two in eight days. He has also now drawn level with Gabriel Martinelli as Arsenal’s second top scorer this season with 10.

But the celebrations were short lived as Tottenham levelled just three minutes later following a dreadful error from Kolasinac, whose loose pass to Luiz was seized upon by Son and the Spurs man finished well.

It was a mistake that was in keeping with the way Arsenal had started the game defensively and one that infuriated Arteta on the touchline.

Both sides went close to a second before half-time, with Martinez tipping a powerful strike from Ben Davies onto the crossbar and both Aubameyang and Pepe sending efforts inches wide of the post at the other end.

Arsenal were the better side after the interval, with Tottenham dropping deeper and deeper, but they could notfind a way through despite dominating for large periods.

Aubameyang went the closest after being picked out by Lacazette, but the Gabon international rattled the angle of post and bar with Hugo Lloris well beaten.

The Arsenal skipper also saw Lloris push one effort wide as the visitors stepped up the pressure. But, just as they looked like going on and getting a winner late on, they gave Tottenham a goal at the other end.

Some slack play by Shkodran Mustafi and Luiz allowed Kane to run in behind them and get a shot away which Martinez did well to save.

But, from the resulting corner, Toby Alderweireld rose unchallenged to head home from Son’s delivery and give Tottenham all three points.

Now Arsenal must pick themselves up and prepare for a week which sees them take on Liverpool and Manchester City in the Premier League and FA Cup respectively.

If they do resurface, then the recent good vibes around the Emirates may begin to dissipate.