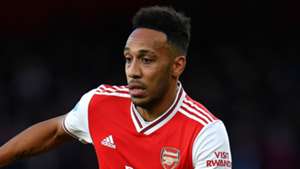 Arsenal must sit down for contract talks with Pierre-Emerick Aubameyang before the end of the season, according to Mikel Arteta.

The Gunners' top scorer is into the final 15 months of his current deal in north London and discussions over an extension have been on hold for some time.

As reported by Goal, Arsenal are keeping tabs on Gent striker Jonathan David as they prepare for the possibility that their star striker may leave.

It has previously been stated that contract negotiations with Aubameyang would not start again until the summer, when the forward would have had just one year left on the contract he signed when he arrived from Borussia Dortmund in 2017.

But speaking ahead of Saturday's Premier League clash with West Ham, Arteta says Arsenal can't afford to wait much longer before sitting down with their 30-year-old frontman.

"We will have to do that at some stage before the end of the season for sure," said Arsenal's head coach. "I will see the intentions that we have, his intentions.

"And where we are sitting at that moment I think it is difficult to predict that context right now. For me it's very easy, I want to keep him in any circumstances."

Another player whose immediate future is up in the air is Dani Ceballos.

The attacking midfielder is currently on loan with the Gunners from Real Madrid but is due to return to Spain in the summer.

Arsenal do not have an option which could see the move turned permanent at the end of the season, but with Ceballos now playing an increasingly influential role under Arteta, there have been suggestions the north London club could look to strike a deal with the Spanish giants which would see him return next season.

But whilst admitting he has been delighted with the 23-year-old Spain international's form since bringing him back into the team, Arteta says no talks have taken place about a permanent move.

'We haven't had any discussions about it," he said. "I'm really happy with Dani and what he's bringing to the team right now. It took him a while after his injury to get to the level that he has and that I've seen in the past.

"He is performing much better now and that's why he is playing more games."