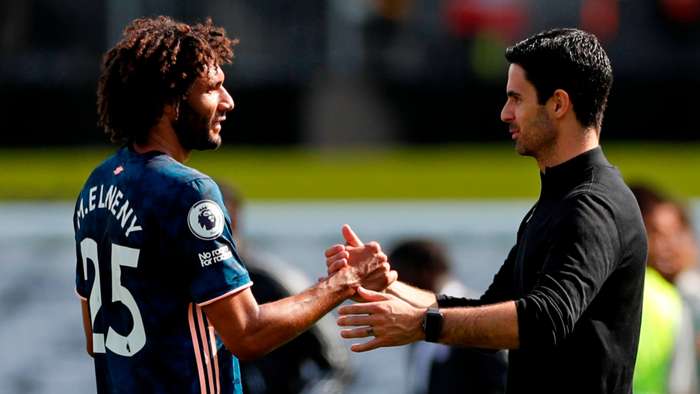 Arsenal manager Mikel Arteta thinks it is too early for talks about Mohamed Elneny's contract extension after his fine start to the 2020-21 season.

On Sunday, the Egypt international was outstanding in the middle of the park as Arsenal secured 1-0 win against Manchester United - a first Premier League win at Old Trafford since 2006.

He has featured in nine ofArsenal's12 matches this season but his current contract is expected to expire at the end of the current campaign.

Ahead of Thursday's UEFAEuropa League encounter against Molde at the Emirates Stadium, Arteta claims it is not the time for contract talks when quizzed about a new deal for the 28-year-old midfielder.

He said in a press conference: "Let's go step by step please! What I can say is that I'm really pleased with the player and hopefully he can continue like that and perform all season."

The Spanish coach also expressed satisfaction with the way Elneny has fought for his place in the team and how he is helping with his performances.

Elneny is in contention to make his third appearance in the Europa League on Thursday, having played every minute of Arsenal's games in the European tournament this season.

One player who has struggled to make an impact at Arsenal is William Saliba, with Arteta admitting the defender could leave on loan in January.

He said:“I am fed up with the situation because as you could see we tried to find a way in the last few days of the transfer window to give him some football.