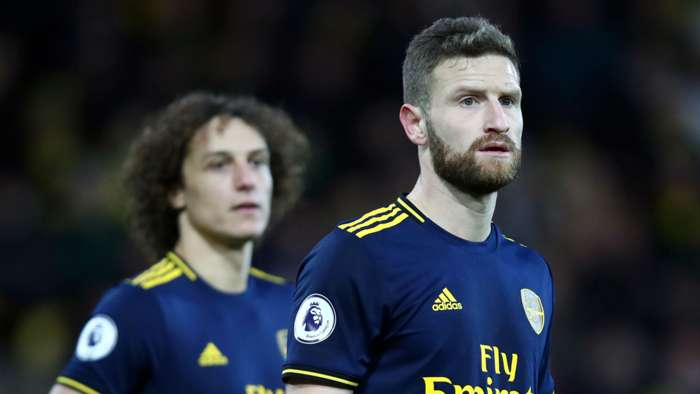 Arsenal goalkeeper Emiliano Martinez says he feels safe guarding the posts behind David Luiz and Shkodran Mustafi, despite frequent criticism of the pair.

The defenders often find themselves as the butt of the joke for opposition fans, with neitherbeing strangers to a high-profile error.

While there have been more setbacks this season, there have also been signs of progress under Mikel Arteta.

On Saturday, a back three of Luiz, Mustafi and Sead Kolasinac restricted in-form Wolves to just a single shot on target at Molineux as Arsenal won 2-0.

"Now, we have structure, we have a gameplan, we have game management and the defence looks stronger and stronger," Martinez told Sky Sports.

"Believe me, David and Musti are top players. David has been at the top for so many years and it's the same with Musti.

"Sometimes when you make mistakes at big clubs you get punished. With Arsenal, people always seem to blame the defence for defeats. But I feel really safe behind them.

"They have experience and they are constantly talking through the whole game. When you play behind them, it's not like what people say. It's not, 'Oh, they make mistakes, they don't know how to play football'.

"I feel really safe, and now that we've kept three clean sheets on the bounce in the Premier League, people are starting to say that the defence is actually solid."

Arteta is making an impression on Arsenal’s squad already, though there is clearly a long road ahead as he looks to rebuild the club.

Nevertheless, Martinez says he and his team-mates have been hugely impressed with their former midfielder’s coaching ability.

"We knew Mikel would be a good manager when he signed here, but we didn't know he would be this good," he said.

"He is incredible. He knows how to deal with experienced players, with young players. He gives us a gameplan against anybody and gives us hope when we do the training sessions.

"He knows what position you have to be in in every department, whether you are a goalkeeper, a striker or a left-winger.

“And then, when we go into the games, those scenarios we worked on in training actually happen, so we start believing in every word that he says.”