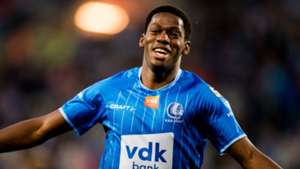 Arsenal are keeping tabs on Jonathan David as they prepare for the possibility of losing at least one of their two star strikers this summer.

The Gunners have been scouting the 20-year-old frontman, who plays for Gent in Belgium, on a regular basis this season and have made it known that he is one of their primary targets ahead of what is expected to be a busy summer at Emirates Stadium.

With top scorer Pierre-Emerick Aubameyang approaching the last 12 months of his contract in north London and Alexandre Lacazette approaching the final two years of his current deal, the Arsenal hierarchy are aware that big decisions will have to be made at the end of the season.

Contract talks with both have been on hold for months and, although both insist they are happy in north London, another season outside of the Champions League could see at least one move on ahead of the 2020-21 campaign.

So contingency plans have been drawn up and Goal has learned that David, who has scored 23 goals in 39 games this season, is high up on Arsenal's list of potential replacements.

Gunners scouts have been impressed by the Canada international, who moved to Belgium two years ago from Ottawa Internationals, and immediately started to make a big impression with Gent.

David scored 12 goals in 33 league games in his debut season in Europe before going to the Gold Cup with Canada last summer and netting six times in just four matches.

Five of his 23 goals this season have come in the Europa League, including the equaliser during the 1-1 draw with Roma in the second leg of Gent's round-of -32 exit.

David's form has caught the eye of several clubs across Europe, with the likes of Manchester United, Chelsea and Leicester City all linked in recent weeks.

The forward does not have a release clause in his contract, but a bid of around ?17.5 million ($23m) is expected to be enough to tempt Gent into doing business.

Whether Arsenal step up their interest in David will depend on what happens with Aubameyang and Lacazette in the summer, with Mikel Arteta also having Gabriel Martinelli and Eddie Nketiah to call upon in terms of his attacking options.

David is keen to move on this summer after two years in Belgium but will choose his next destination carefully as he does not want to rush into a move and find himself at a club where he could be struggling for game time.

And, whilst the Premier League is an appealing option, Goal has been told that a move to Germany or France could be the most likely next step for a player who only turned 20 in January.