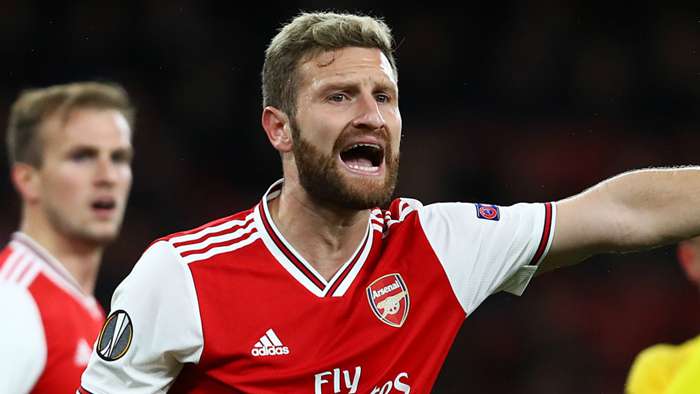 Shkodran Mustafi looks set to suffer FA Cup heartache, with the defender expected to miss the Wembley showpiece with Chelsea through injury.

Mustafi, who was firmly out of favour with former boss Unai Emery, has become an integral part of Mikel Arteta’s side and had started nine of Arsenal’s 10 games prior to the FA Cup semi-final with Manchester City.

But after sufferinga hamstring injury in the closing stages of the 2-0 win over Pep Guardiola's side, Mustafiwasforced to miss Tuesday night’s 1-0 defeat at Aston Villa.

The Germany international has undergone a scan on the problem and head coach Mikel Arteta has now revealed he fears the centre-back will not be available to face Chelsea at Wembley.

“I doubt it,” said Arteta, when asked if Mustafi would be fit for the final.

“We have to see how he evolves in the next few days, but at the moment I doubt it.”

Arsenal go into Sunday’s Premier League finale with Watford sitting 10th in the table, knowing they can’t finish higher than eighth. It will be the club's worst league finish since 1995.

That means Europa League qualification for the 2020-21 campaign rests on winning the FA Cup final a week later.

Should they beat Chelsea, it would be a fourth FA Cup success for the club since 2014, but Arteta admits that winning at Wembley would not make up for the poor league campaign.

“No,” he said, when asked whether an eighth-placed finish and a FA Cup success would add up to a good season.

“For me, this club deserves the best and you have to be fighting for every title.

“Obviously after everything that happened, if we are able to win the final and qualify for Europe, we can say it’s OK. But it’s not the level for this football club.”

Meanwhile, Arteta says he plans to play as strong a side as possible against relegation-threatened Watford this weekend out of respect for the other sides who are battling with the Hornetsto stay in the Premier League.

With the cup final looming, there could be a temptation to rest some key players, but Arteta insists that won’t be the case.

“I’m going to assess the squad and how they are feeling,” he said. “Ideally I want to play as strong a team as I can.