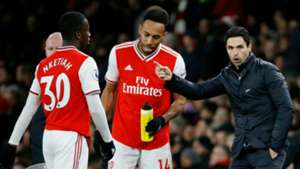 Arsenal manager Mikel Arteta has delivered a warning to officials that the game's leading stars in England are "cracking" under the pressure of an intense calendar.

The Premier League introduced a two-week staggered winter break for clubs this season, but it has had a knock-on effect for the FA Cup, with the fifth-round ties to be played this midweek, starting with the Gunners' trip to Portsmouth on Monday.

But while the winter break was broadly welcomed in England, Arteta has warned that more must be done to help top players.

"Something has to be done because you can see players are cracking and cracking every season," he said.

"You can sustain that for one season, two seasons, but after three or four seasons you end up paying the price and I think the quality at some stage will drop. But we have a history, a massive culture, here with the cup games and to go against that is difficult.

"I think there are a lot of ways around it. We're not going to please everyone with the decisions that have to be made. What is for sure is that, for players, it's an enormous amount of games.

"The intensity is raising every single year, the level of pressure too, and sometimes it's too much for them.

"If there is no change, we have to be allowed to have 26 or 28 squad players, which we are not allowed to do, and even more players on the bench."

The Spaniard, who enjoyed a playing career that took him to Barcelona, Rangers, Paris Saint-Germain, Everton as well as the Gunners, pointed to the potential disruption postponements owing to unexpected events may cause.

"It's very condensed and if any event happens that is not considered, like for example the coronavirus, then it will be even more complicated," he said.

Arsenal have played 39 times this season and will play at least 12 more fixtures before the campaign is out.