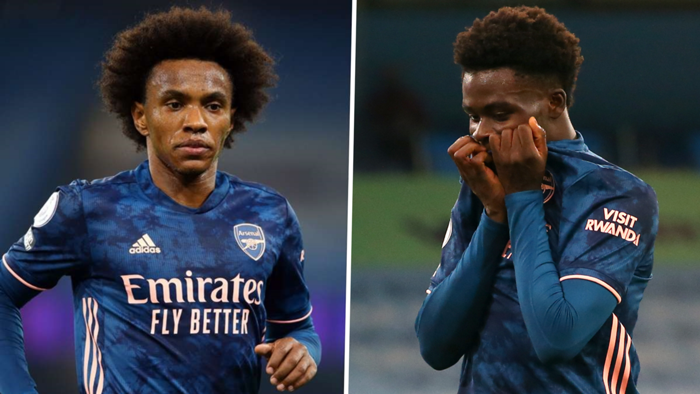 Mikel Arteta has confirmed Willian and BukayoSakapicked up injuries during Arsenal’s 0-0 draw with Leeds United.

Willian did not appear for the second half and Sakafailed to finish the match - being replaced by Ainsley Maitland-Niles - after entering the field from the bench in the 57th minute.

Arsenal have an intense passage of games over the course of the next month, and Saka and Willian will be assessed by the club’s medical staff on Monday.

“He was in pain,” Arsenal boss Arteta told the club’s official website of 19-year-old Saka. “We're going to have to assess with the medical staff how bad it is, but it looked like a pretty bad challenge and he was in pain so we decided to take him out straight away.”

Commenting on Willian, Arteta said: “He was feeling something muscular and we had to take him off.”

Arsenal travel to Molde in the Europa League on Thursday, and Arteta admits it may be a patched-upside that turns up in Norway.

“We will see what happens in the next few hours,” Arteta said. “But we will put a team there to compete in the way that we do now and every team is going to face challenges with the amount of fixtures we have. Let’s hope that we can get some back.”

Arsenal are struggling for goals at the moment -they have scored a mere nine from their opening nine games in the Premier League -but Arteta feels his side will soon be rewarded for their positive play,provided they are more ruthless.

“That flair, that creativity and that momentum that the players need to make the last action, it's the most difficult thing in football,” he said. “It's not that you're not creating the chances, but we have to create more and we have to be more consistent in the final third with the amount of things that we finish and how we finish them.

"Itwill come, and the reality as well is that we haven't had much continuity in a lot of the players for various reasons, which is very important to get the understanding right with them.

"We need a lot of goals to win football matches and to be the top team that we want to be - without that it’s impossible. It doesn’t matter how good we are defensively.