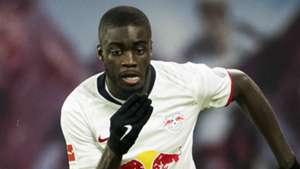 Dayot Upamecano continues to spark talk of interest from the likes of Arsenal and Barcelona, but the RB Leipzig defender has been urged to "take his time" with any transfer call.

The 21-year-old has become one of the most sought-after talents in European football.

His rapid progress has seen him make steps up from the Austrian second tier at Liefering, through a spell at Red Bull Salzburg and onto Bundesliga title hopefuls RB Leipzig with consummate ease.

His potential has been noted by leading sides in Spain and England, with Real Madrid another of his reported suitors.

Leipzig are said to have put a hefty price tag on his young shoulders, with the German giants prepared to hold out for offers in excess of ?70 million ($86m).

It could be that their desire to retain the services of a prized asset is tested in the next transfer window, with formal approaches expected.

Upamecano is only under contract until 2021, so a big call needs to be made on his future.

He could make that himself, with an exit door flung open, but Leipzig's sporting director, Markus Krosche, has warned the Frenchman that he needs to think carefully before taking another leap forward in his career.

Krosche told Kicker when quizzed on Upamecano and what his next move should be: "This is a far-reaching decision for a player. He should take his time with that.

"He has to be clear about exactly what he is going to do, how he sees his future.

"Maybe that has changed a bit as a result of the new situation [coronavirus]."

Upamecano has stated that he will be making a decision on his future at the end of the 2019-20 campaign, whenever that may be.

He has told RMC Sport: "As I said, first I focus on Leipzig.

"And afterwards, I know that I am being courted, that there are clubs that want me.

"I will talk well with my agents and my parents at the end of the season. And we will make the right decision."

Leipzig sit third in the Bundesliga with nine games left to take in, five points adrift of leaders Bayern Munich, but it remains to be seen when or if the season will be completed as competitive football around the world remains in a coronavirus-enforced lockdown.