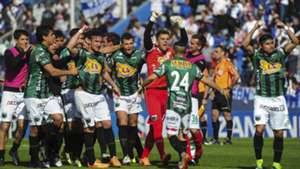 Nueva Chicago's Arnaldo Gonzalez cast a shadow over his side's Primera Nacional clash against Atlanta by making anti-semitic gestures to the home crowd.

Atlanta, from the Buenos Aires neighbourhood of Villa Crespo, went back to the top of Argentina's second tier with a 2-0 win over their city rivals on Sunday.

No less than three players were sent off in a fractious clash, with Nicolas Previtali seeing red for the hosts and Gonzalez and Facundo Mater both walking for Chicago.

Mater was sanctioned for elbowing Luis Lopez, while Gonzalez earned his marching orders seconds later for attacking Axel Ochoa as tempers boiled over in the second half.

Gonzalez, however, then risked further punishment with a series of offensive gestures to the Atlanta crowd, who jeered his exit from the field.

The player first touched his head to imitate the Jewish kippah before signalling to his crotch in a mockery of the circumcision ritual.

Villa Crespo has a traditionally strong presence from Buenos Aires' Jewish community, making Atlanta a regular target for such anti-semitic abuse from rivals.

Chicago responded to Gonzalez's gestures with a statement in which the club offered its apologies to the Bohemio and strongly condemned his actions.

Chicago responded to Gonzalez's gestures with a statement in which the club offered its apologies to the Bohemio and strongly condemned his actions.

"We at Club Atletico Nueva Chicago reject the gestures made by the player Arnaldo Gonzalez and we will analyse what disciplinary measures to take," the club wrote on its official Twitter account.

"We offer our apologies to all fans of Atlanta and the entire Jewish community."

It is not the first time in 2020 that Chicago have found themselves in the headlines for the wrong reasons.

At the start of February the club's Mataderos stadium was the stage for a bloody intra-fan pitched battle that saw clubs and knives being brandished in the stands and several supporters requiring hospital treatment for stab wounds.

Chicago were subsequently docked one point by the Argentine FA, who may also act to punish Gonzalez for Sunday's abuse.

Atlanta too were caught up in fan violence at the start of their visit to Independiente Rivadavia, a match that lasted just five minutes before fights and stampedes in the home end caused postponement.