'Are you calling me a liar?' - Newcastle boss Bruce fires back after Saint-Maximin fallout reports 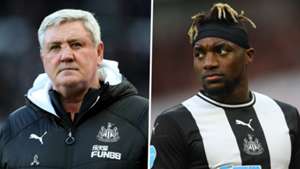 Saint-Maximin returned to the starting line-up for Newcastle's trip to West Brom in the fifth round of the FA Cup on Tuesday night.

The Magpies progressed to the quarter-finals with a 3-2 victory thanks to a first half-double from Miguel Almiron and a Valentino Lazaro effort, after surviving a stirring second-half fightback from the Baggies.

Saint-Maximin played a key role in the win and hit the bar with a stunning long-range effort in the first 45 minutes, despite the fact Bruce had said the 22-year-old was struggling with hamstring and back issues in the lead up to the contest.

He started on the bench during Newcastle's 0-0 draw at home to Burnley at the weekend, with the Daily Mail publishing an article suggesting the attacker had been involved in a row with Bruce on Monday.

When asked to comment on the rumours, Bruce took the opportunity to address the newspaper report directly and insisted that the journalist in question had printed a completely false story.

"It's total lies and nonsense," Bruce said in a post-match press conference at the Hawthorns. "I am glad your source is wrong. Are you calling me a liar?

"Your report is wrong - I had no row with Saint-Maximin - wrong."

Newcastle will play in the last eight of the FA Cup for the first time since 2006, with the draw set to take place on Wednesday night following Manchester City's tie with Sheffield Wednesday.

Bruce made it to Wembley on two occasions during his stint in charge at Hull City, and came very close to claiming the trophy in 2014 when the Tigers were beaten 3-2 by Arsenal in the final.

The 59-year-old tried to play down expectations after guiding the Magpies through to the latter stages of the competitions but admitted that a day out at Wembley holds great appeal for the club and its supporters.

Bruce added: "I experienced it at Hull, and if you ask the supporters at Hull what they enjoyed most, Premier League survival or being in the Premier League, all of them to a man or woman would say the day out at Wembley is the one thing they've enjoyed the most.

"How often does a club like that get to Wembley? We're a step closer so let's see who we pull out of the hat , but there's still some big teams left in, isn't there?"