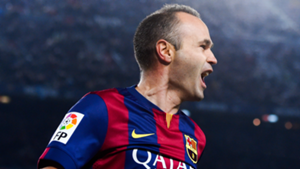 Football documentaries have been extremely popular recently, with the likes of Barcelona, Manchester City and Borussia Dortmund having their own fly-on-the-wall series.

Barcelona and Spain legend Andres Iniesta is the latest football star to receive his own documentary, with Andres Iniesta: The Unexpected Hero due to give viewers an in-depth look at the life and times of the celebrated former midfielder.

What is Andres Iniesta: The Unexpected Hero?

Former Barcelona talisman Iniesta will be the centre of his own documentary, titled "Andres Iniesta: The Unexpected Hero".

The documentary, which will be a film instead of a multi-part television series, will cover the ex-midfielder's highly successful career at Barcelona and Spain. It will cast a light on his difficult beginnings at Barcelona's academy La Masia, and will follow him through his breakthrough in the team and tremendous trophy-laden time at Camp Nou.

It will also focus on his victorious World Cup-winning goal for Spain in the 2010 final against the Netherlands, and into his journey with Vissel Kobe in Japan after he announced his departure from Barcelona.

Says Iniesta: "My story is the story of a person who tries to overcome any obstacle to be the best version of himself. It is a story about difficulties from an optimistic perspective and I hope people find inspiration in it."

The film is also set to include several exclusive interviews with high-profile figures who have been part of Iniesta's rise, including Lionel Messi, Pep Guardiola, Neymar, Xavi, Fernando Torres, Louis Van Gaal, Carles Puyol and more.

The project will be produced by Rakuten, in collaboration with Spanish production company Producciones del Barrio.

You can watch the trailer below.

When will Andres Iniesta: The Unexpected Hero be released?

The documentary is expected to be released in spring 2020.

How to watch Andres Iniesta: The Unexpected Hero

Andres Iniesta: The Unexpected Hero will be available to watch for streaming exclusively on Rakuten TV.

In Europe, it will be available to watch on AVOD Rakuten TV.