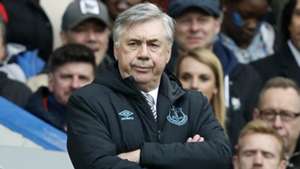 Carlo Ancelotti has never gone down to a heavier defeat in his vaunted managerial career than the 4-0 defeat his Everton team suffered against his former club Chelsea on Sunday.

The Italian has lost 4-0 once before, in 2015, when his Real Madrid side were swept aside by city rivals Atletico.

Ancelotti, most recently with Napoli before his move to Merseyside, took charge in 109 games in all competitions in the Stamford Bridge dugout. He won the Premier League and FA Cup during his time in west London.

Had the Toffees won Sunday's game they would have been just three points off fifth place, which may bring Champions League football to an English club next season should Manchester City be unsuccessful in appealing their suspension from European football. As it is they are now 12th in the table.

Everton recorded a paltry three shots on goal in the match, their lowest total in a Premier League game since December 2017, against local rivals Liverpool. Only one of their shots was on target, while Frank Lampard's team managed 17 in total with 11 on target.

Chelsea's peppering of Jordan Pickford in the Everton goal bore fruit, and their eventual 4-0 win was their biggest in the top-flight since defeating Huddersfield Town 5-0 in February 2019.

Mason Mount opened the scoring before the 15-minute mark with Pedro adding the second before half time.

Willian and Olivier Giroud completed the rout before even an hour of the game had elapsed.

Mount's goal was the 21st this season scored by an English player for Chelsea. Only two teams, Southampton, with 24, and Leicester City, who have 31, have more goals scored by domestic products in the league this year.

The huge win takes Lampard's men five points clear of Wolves, solidifying hteir place in the top four which looked under threat after a poor run of recent form.

Fourth place would guarantee Champions League football next season, with Chelsea staring elimination from this year's competition in the face.

They must overcome a 3-0 deficit against Bayern Munich away from home on March 18 if they are to progress this season.