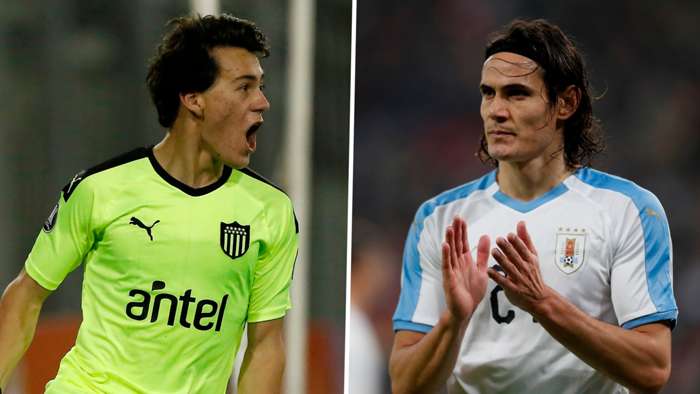 Manchester United wonderkid Facundo Pellistri has expressed his gratitude towards Edinson Cavani for helping him settle in England, describing hisfellow Uruguayan as "one of the best players in the world".

The talented young winger has spent his first three months at Old Traffordwith the U23s, with Ole Gunnar Solskjaer making it clear that he needs time to develop before stepping up to the senior stage.

Pellistri could graduate to the first team sooner than expected if he continues on his current trajectory, as he has made a big impact in the reserves under the stewardship of Neil Wood.

The U23s boss heaped praise upon the former Penarol starlet after seeing him open his goalscoring account for the club in December , telling the Manchester Evening News: "He is progressing nicely but I don't want to put too much pressure on him. He is working hard, trying to take in as much information as he can."

Pellistri now has two goals and an assist to his name from six Premier League 2 outings, and says his transition to England from Uruguay has been made easier by the support of his new team-mates.

Cavani, who also joined the Red Devils in the summer transfer window, has played the most important role in helping the youngster adapt, as Pellistri revealedduring an in-depth interview with MUTV.

“I'm settled here,”said Pellistri. “Thanks to my team-mates and obviously my family from Uruguay, I am now feeling at home in this country, which is all new to me.

"Most of the South American team-mates are the ones who I am more close to but, obviously, I am all fine with everyone. Every team-mate here is very kind - in the first team, and also the Under-23s who I started playing with. I have met lots of guys who were very nice with me and that is very important.

“It's been amazing to train with guys like Rashford, Pogba, Mata and Edi Cavani, who is very close friends with me. It's amazing for me because I watched them on TV and now I am practising with them.

"The intensity, the high quality they have, it's great for me to play with them and I improve a lot. All the time, I speak with Edi and he is a very nice person. He is always trying to be around me, giving me advice and everything that I need. He is there to help me and that is very important for me. I am very happy with that.

Solskjaer labelled Pellistri as "one for the future" earlier in the season, while also insisting the teenager has the quality to add a new dimension to United's current team.

Asked if the Norwegian's complimentsprovided him with extra motivation to succeed at Old Trafford, Pellistri responded:“Obviously, it's very nice to hear that the manager speaks about youand I am in contact with him all the time.

"He is giving me advice and asking me how I am doing and how I am feeling. That, for me, is very important and I am really thankful to him.

“For me, it’s going to be a dream to have a chance in the first team and to fight for a place, and that Manchester United are going to the top. That is my biggest dream.