Alisson's injury is a setback for Liverpool 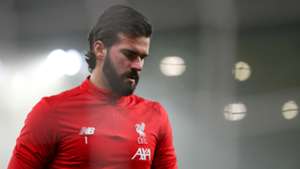 For a team like Liverpool, that scores goals for fun and has made it a habit to pick up wins, the position in between the sticks is the most underrated.

Alisson Becker has been brilliant for the Reds and he is nothing short of indispensable for Jurgen Klopp's team. Liverpool supporters only have to think about the last big game without the Brazilian goalkeeper guarding their goal - the UEFA Champions League final against Real Madrid two years ago. Loris Karius was Liverpool's goalkeeper and had a game to forget.

Liverpool's goal will be tested against Atletico Madrid in the upcoming second leg of the Round-of-16 in the UEFA Champions League. With Klopp's team trailing by a goal from the first leg, they will be required to attack an Atletico Madrid side renowned for their ability to catch teams on the break.

In what was a big blow for Klopp, Alisson picked up a hip injury in training ahead of Liverpool's FA Cup fixture against Chelsea. They lost the game 0-2 and for both goals, second-choice keeper Adrian should have done better.

Now, to make things worse, Klopp has confirmed that his first-choice custodian will miss the crucial second leg against Atletico Madrid. The Premier League league leaders are set for a spell of games without Alisson in goal.

Speaking ahead of their league game against AFC Bournemouth, Klopp explained, "Next week no, that means Atletico. I don't want to say no [to the Everton game] but I don't know if he will be available. We have to judge the situation anew."

Having Alisson in between the sticks instils a huge deal of confidence to what has been a phenomenal backline for Liverpool. His distribution, reflexes and command of the area have made him one of the best goalkeepers in the world. Only Burnley's Nick Pope has more clean sheets (11) than Alisson (10) in the Premier League.

When one of the best in the world becomes unavailable, opponents are bound to target his replacement, who then becomes the weak link of the team. Liverpool need Adrian to step up and deliver in Alisson's absence and without a doubt, Diego Simeone will have a few instructions to pass on to his forwards in the much-anticipated midweek clash.

If you are in Philippines, Laos or Cambodia, you can watch Liverpool vs Atletico LIVE on DAZN's Facebook and YouTube pages