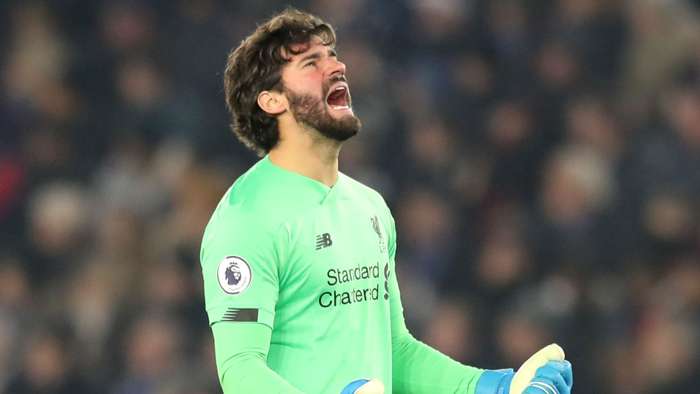 Andy Lonergan has hailed "flawless" Liverpool No 1 Alisson as "by far the best goalkeeper in the world".

The 27-year-old didn't take long to repay that investment, winning the Premier League's Golden Glove award in his debut season while also playing a key role in therun to a second successive European showpiece.

Liverpool won theirfirst trophy of Jurgen Klopp's reign by beating Tottenham in an all English final, which turned out to be a springboard towards even greater success.

The Premier League, UEFA Super Cup and FIFA Club World Cup have all been added to the Anfield trophy cabinetin 2019-20, with Alisson once again proving to be a vital presence between the sticks.

The Brazil international overcame early-season injury problems to record 13 clean sheets in 29 top-flight outings, andLonergan has now offered an insightinto what makes him such a special keeper.

Klopp drafted Lonergan in last summer amid a shortage of back-up options between the sticks, which gave him the chance to work closely with Alisson on the training ground over the past 12 months.

The 36-year-old told the Liverpool Echo of his Anfield experience: “We’ve not had everyone fit all season, it’s only recently we’ve had all four goalkeepers, first-team goalkeepers, training together.

“It’s been brilliant, it’s the best group I’ve been part of. Obviously talent-wise but as guys as well.

“It’s common for people to say, 'The goalie had nothing to do,' but Alisson makes it that way. The way he controls his defence.

“The hardest thing for a goalkeeper is having nothing to do because your lesser goalkeepers will start looking for stuff, coming out for balls aren’t theirs, trying to make an impact on the game, but Ali is flawless. He is by far the best goalkeeper in the world and I won’t have anyone ever tell me any differently.”

Spanish shot-stopper Adrian joined Liverpool on a free transfer just beforeLonergan, and filled in for Alisson for much of the first half of the season.

Lonergan went on to praise the 33-year-old for making an immediate impact at Anfield, adding:“The way Adrian came in and played for nine or ten league games on the bounce at the beginning of the season, he was fantastic.

“He was absolutely outstanding with the saves he made and his general play. I don’t think you could have got a better replacement. How he performed, I don’t think anyone else could have come in and done that. It’s a credit to him.

“He’s a top man and an absolute legend of character. He trains every day and works his socks off and I’m so pleased that it’s happened for him. They’re fantastic people and the two goalkeeper coaches are the best goalie coaches I’ve worked with. They work great together.”