Alba not impressed by whistling Barca fans as he defends Sarabia 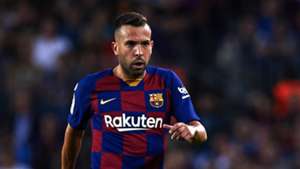 Jordi Alba has expressed his disappointment at Barcelona fans whistling the team during their nervy 1-0 win over Real Sociedad, while he also defended the club's assistant manager Eder Sarabia.

A 1-1 draw away against Napoli in the Champions League was followed by a 2-0 El Clasico defeat against bitter rivals Real Madrid and the supporters at the Camp Nou were on edge as their side laboured to what looked like it would be a third consecutive game without a win.

However, an 81st-minute Lionel Messi penalty spared Barca's blushes, with fans making their displeasure with the team's performance audible early on- something Alba took issue with.

"No one likes to play poorly or how we're playing at the moment, but I don't like it when in the 15th minute with the score goalless there are whistles," he told reporters after the game.

"No one likes it when the fans go against you, especially in your own stadium. Our attitude is good and all the players are giving everything out on the pitch. I'm not going to hide. Just as I respect everyone, they also have to respect me.

"I respect Barca fans a lot. Even falling [early] in the Champions League [in recent seasons], they have stuck with the team.

"It's not easy when things are not coming off, but we have to live with that at the end of the day. We know that if we're not at our best, it's going to be hard. We have to be strong mentally to turn the situation around."

The 30-year-old left-back also jumped to the defence of new boss Quique Setien's assistant manager Sarabia, who has been heavily criticised in the media for his recent antics on the sidelines.

"It's as if Sarabia killed someone," Alba continued. "Can the coaching staff not express themselves as they want? The comments he made are the most normal in the world.

"He lives the game intensely, he didn't show a lack of respect to anyone. I would have done the same in his position - or worse. We're not annoyed, not at all."