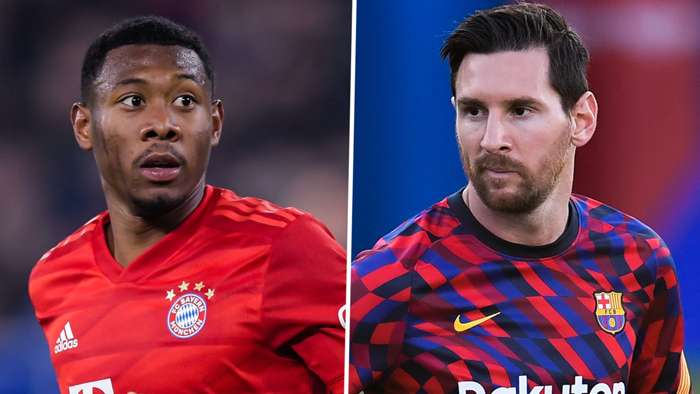 Lothar Matthaus admits it would be understandable if David Alaba wanted out of Bayern Munich in order to work alongside Lionel Messi at Barcelona, but the Austrian defender has been warned that he should not let monetary factors determine a big career call.

Discussions regarding fresh terms for the 28-year-old in Germany have hit deadlock.

He has entered the final year of his current contract and has offered no indication that he will committing to an extension – with former Bayern president Uli Hoeness hitting out at Alaba’s supposedly “greedy piranha” of an agent.

Alaba has since rubbished claims that he is making excessive demands at the Allianz Arena.

Matthaus hopes a compromise can be reached that suits all parties and that any exit, if one is to be made, is driven by sporting ambition and not financial gain.

The Bayern legend told Sky Deutschland : “David has become one of the most important players on this super team and I am sure that everyone at this club would like him to stay.

“Should it really be the case that he and his advisor are only interested in getting a higher salary, that would not be the smartest decision in my opinion.I too could have made more money on some contracts during my time.But I can assure David that at the end of his career it won't be what makes him happy.

“Every club has one or two players in its salary structure that are at the top.That might be Manuel Neuer and Robert Lewandowski at Bayern, and rightly so.Nobody earns more than Messi at Barcelona and I couldn't have asked for more than Diego Maradona if I had gone to Naples.

“But if David moves up to the top three or top five with his new contract at Bayern, that's perfectly fine.Especially in this day and age and with the connection that David and Bayern have, money shouldn't be the most important factor.

“There is one thing that the extra millions a move might bring with it will never be able to give him: love and appreciation from the club, team and fans.Whether at Real, Barcelona, ​​Manchester City or Paris.David would be recognised and respected everywhere for being a great person and a fantastic footballer.But he won't find the warmth of the nest and the nice feeling that the people at FC Bayern give him every day at any other club.

“However, if David is interested in anything other than a few million, then I could understand him.I also wanted to move to Real Madrid in 1991.Inter didn't let me go though.If David decides that after so many years he really wants to experience something different, then it's understandable.If he has the great desire to play for a club like Real, to experience the Premier League week after week or to make magic with Messi, those would be arguments that I can understand.”

Alaba has said on his long-running contract saga: “This club is not just any club for me, it is home and family. I've been wearing the iconic red jersey for 12 years, and I've done it every single day with dedication, pride and passion, and I still do. The well-being of this fantastic club is above all things and is also very important to me.

“I have taken every responsible person, every team-mate, every employee of the club to my heart. In a family, you may have a different opinion, you might argue, but it always stays within the family. I will continue to heed that.