Aguero's back! Joy for Man City striker at Fulham after year of misery
Match

Aguero's back! Joy for Man City striker at Fulham after year of misery 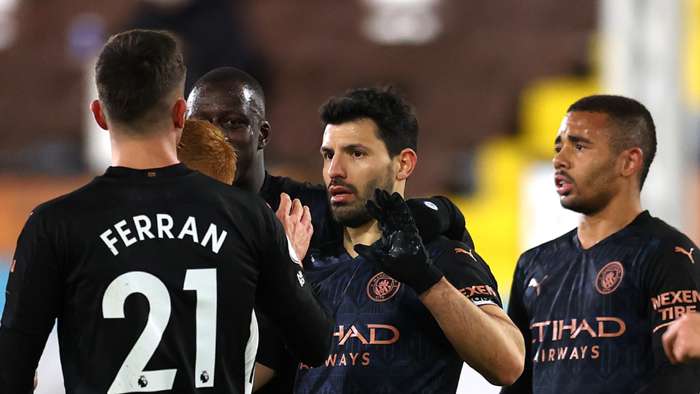 It may have only been a penaltybut Sergio Aguero’s first Premier League goal in more than a year was a joyous moment after a painful year.

The Argentine couldfinally beseen smiling again when he converted from the spot in Manchester City's3-0 at Fulham on Saturday night.

And would begrudge him that moment of happiness after a torturous12 monthswrecked by injury and illness.

Of course, Aguero still has some way to become a regular in Pep Guardiola’s plans as they enter a key stage of the season with four trophies still up for grabs.

And with his contract expiring at the end of the season,talks over a new deal have been put onhold for now.

However, at Craven Cottage, the club’s greatest ever goalscorer was back doing what he does best, sending a timely reminder that he can still make an importantcontribution to the quadruple bid.

Guardiola has said that he can’t be sentimental when it comes to picking Aguero, but he remains the City player most supporters would trust more than any other to take a vital chancebetween now and the end of the season.

Here,hewas making just his second Premier League start since October and he turned in an encouraging performance, as he went about chipping awayanother layer of rust after a succession of significant stints on the sidelines.

The 32-year-old was lively and lasted the full 90 minutes as he started in the same side as Gabriel Jesus for the first time in the Premier League since February 2020.

It was an experimental line-up, with Ferran Torres completing a narrow front three, and after a stale first half, City burst into life at the start of the second half.

The opening goal was simple enough, withJoao Cancelo’s whippedfree-kick stabbed home by John Stones barely a minute after the restart, and from that moment on, City's forwards flourished.

Nine minutes after the opener, they hassled Fulham centre-back Joachin Andersen into a clumsy mistake. Gabriel Jesus seized on the loose ball andtook it around goalkeeper Alphonse Areola to score.

Then, on the hour, Torres was caught by former City defender Tosin Adarabioyo in the area, and Aguero hammered home the resultingpenalty despite slipping as he shot.

The victory, which moved City 17 points clear at the top of the table, showcased City's incredible strength in depth.

Guardiola made seven changes from the side that beat Southampton in midweek, with Raheem Sterling, Kevin De Bruyne, Ilkay Gundogan and Riyad Mahrez among those rested.

This was a notably creative team from the City boss,with three centre-backs and Benjamin Mendy, who was making his first Premier League start in four months, playing more as a winger than a full-back.

It’s that time of year when the focus switches to the Champions League and Guardiola is often accused of over-thinking his tactics during the knockout stages of the competition.

Whether it was a way of out-thinking respected Fulham boss Scott Parker, a trial run for tougher games to come in Europe, or simply a case of resting players for the second leg against Borussia Monchengladbach and FA Cup quarter-final with Everton, it was hard to know.

But a back-three of Aymeric Laporte, Ruben Dias and Stones saw the latter often playing as underlapping centre-back, which helped breakdown the stubborn Cottagers.