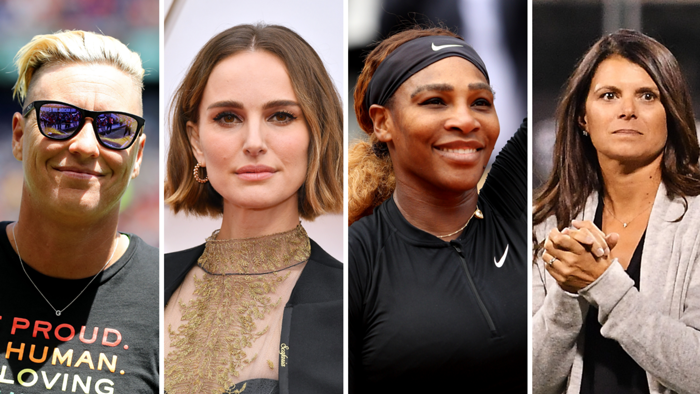 “Today we take an exciting step by announcing the first women majority-owned and led ownership group," Portman said in a statement. "I am thrilled by the opportunity to partner with this incredible group of people to bring a professional women’s soccer team to Los Angeles. Together, we aim to build not only a winning team on the field, but also to develop a passionately loyal fan base.

"We also hope to make a substantive impact on our community, committing to extending access to sports for young people in Los Angeles through our relationship with the LA84 Foundation. Sports are such a joyful way to bring people together, and this has the power to make tangible change for female athletes both in our community and in the professional sphere.”

Williams, the most decorated tennis player of the modern era, is also among the owners, as is her two-year-old daughter Alexis Olympia Ohanian, Jr.

"I am proud to be a part of this wonderful group working to bring a women’s professional football club to Los Angeles," Ohanian said."Chiefly, because I’m a fan of the game, but also because I believe there is massive potential for the sport and it's been undervalued by too many people for far too long.

"As someone who spends hours kicking around a football with my two-year-old daughter, I want her to have a front-row seat to this revolution. I’m personally investing on behalf of my family because creating more opportunities in women’s sports is important to my wife and me, and we want to be a part of making a better future for our daughter.”

With the introduction of this new LA-based team, the NWSL will now feature 11 teams, with nine clubs currently in the league and Racing Louisville FC set to begin play in 2021.

The league is currently holding the NWSL Challenge Cup in Sandy, Utah, with the Portland Thorns set to face the Houston Dash in one semifinal while Sky Blue FC face the Chicago Red Stars in the other.

“The growth trajectory of the NWSL is incredibly exciting, but we also need to be strategic and thoughtful about how fast we expand and the communities we partner with," said league commissioner Lisa Baird."We’ve long sought the right partner in LA considering the NWSL fanbase that already exists in the region and the massive interest in women’s soccer in general.