'Actions are louder than words' - Union honor Floyd, Taylor and victims of police brutality with names on jerseys

'Actions are louder than words' - Union honor Floyd, Taylor and victims of police brutality with names on jerseys 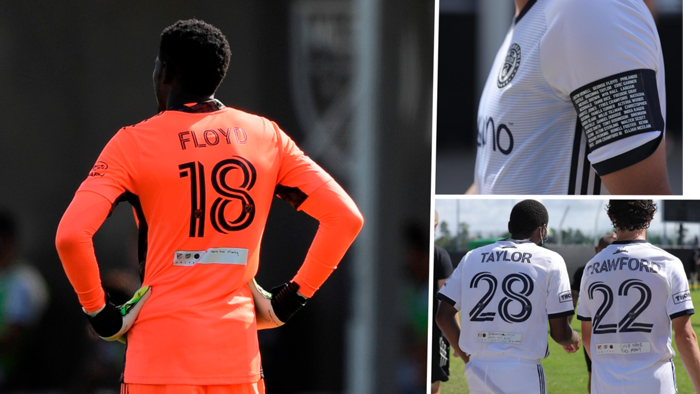 When the Philadelphia Union took the field for their first match of the MLS is Back tournament, their jerseys were slightly different.

In Thursday's match against New York City FC, the second of the competition, the Union unveiled jerseys featuring the names of George Floyd, Breonna Taylor and other victims of police brutality.

Floyd and Taylor's deaths paved the way for the ongoing movement for racial equality, with protests occurring both in the U.S. and worldwide as people all over the world demanded justice.

However, it wasn't just those recently killed that were honored, as the Union also included names like Philando Castile, Trayvon Martin and Eric Garner, whose deaths sparked similar movements leading to the foundation of Black Lives Matter. Every jersey also had the phrase "One Name Too Many" written under the number.

Additionally, Bedoya, the club's captain and scorer of the game's lone goal, wore a custom armband featuring the names of 30 people that were victims of police brutality.

"At the start, certainly things going on in our country far bigger than soccer," head coach Jim Curtin said."I have to say I'm very proud of my players throughout the past four months for the leadership they've shown, the leadership role they've taken in the Black Lives Matter movement, educating the other players on our team.

"The idea today was action over permission; I hope the league understands that. It was done to show respect, to learn, to grow, to make our country better. I'm really proud of my players for everything they've done."

Defender Mark McKenzie added:“We couldn’t wear the names of every victim lost, but we feel that the wording of One Name Too Many brought that to the forefront.The names we wore on the back, that’s One Name Too Many.”

The Union's messagecomes after Wednesday night's display prior to the first game of the MLS is Back tournament, which saw Orlando City defeat Inter Miami 2-1.

Prior to kickoff, members of Black Players for Change gathered around the field, with representatives from every MLS team involved ranging from players to coaches and staff members.

Participants stood in silence for eight minutes and 46 seconds, symbolizing the death of Floyd, with players raising their fists in the air in a nod to the protest by John Carlos and Tommie Smith at the 1968 Olympic games.

Meanwhile, players from Orlando City and Inter Miami kneeled in the centre circle before doing so again upon the referee's whistle.

Players from each team have been wearing shirts with slogans such as“Silence is Violence” and“Black and Proud”.

Black Players for Change, that organized Wednesday night's display, was founded in June and features over 170 players from across MLS.

​"It was to continue the conversation that needs to be had. We first and foremost asked our team if they were OK with it because solidarity is key and we want to make sure everybody feels comfortable," defender Ray Gaddis, a prominent member,said of the Union's display.

"Actions are louder than words. Again, it's to further the conversation and to continue to use our platform to be a voice for the voiceless. It was a collective group effort."