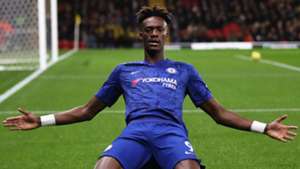 Tammy Abraham claims to be "almost fit", as Chelsea wait on his return to action, with the 22-year-old striker confident that he will soon be ready for club and country.

Having netted 15 times in a bright start to the 2019-20 campaign, the Stamford Bridge academy graduate has endured a frustrating spell on the sidelines.

A niggling ankle complaint has prevented Abraham from maintaining the standards he set after being entrusted with the responsibility of leading the line for Frank Lampard's Blues.

A problem first picked up during a 2-2 draw with Arsenal in January has continued to flare up and leave the highly-rated frontman with a joint that looks like a "swollen ball".

Chelsea sent Abraham for tests in Barcelona as they sought to get to the bottom of the ailment and were relieved to hear that no surgery is required.

With the youngster now working his way back into contention, it is expected that he will come into contention for domestic minutes over the coming weeks and push for a place in Gareth Southgate's England squad for friendly dates with Italy and Denmark.

Abraham told the Evening Standard when asked if he expects to be fit enough to figure for his country: "Yes, definitely. I'm almost fit. There's still a bit to do. I'll get there soon.

"It's a recurrence. [The problem was] playing on it and aggravating it even more. It is still like a swollen ball really but it is getting better day by day.

"The club wanted me to go to Barcelona. They just wanted different eyes, a different mindset on this situation. He told me what was wrong, exactly what the Chelsea physios said and he recommended some stuff for me to do. I'm doing physio right now.

"This time, I just said 'I'll just come back when I'm 100 per cent' instead of coming back and going again."

Abraham is desperate to add to his collection of four senior England caps as a door of opportunity remains open at international level.

The stage is set for somebody to step up in their absence, with Abraham intending to be that man.

He added: "The March internationals could be [a great chance] if it did come into my hands.

"I am ready for it. I have to step up and do what I do best.

"I've spoken to Marcus. Harry Kane is someone I've always idolised. Hopefully he can be back because he is a player that England definitely need and Marcus as well. They are both great young talents.

"I've watched England on TV [at tournaments] and actually going to the Euros would be a dream come true. But first of all, it's about knuckling down at Chelsea."