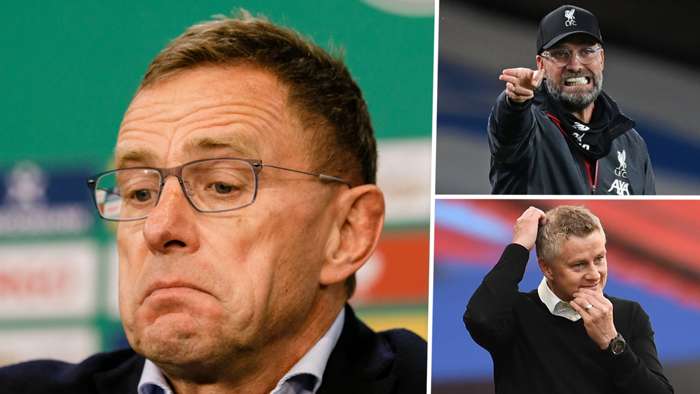 On the surface, it might seem that Stefano Pioli has simply pulled 'an Ole Gunnar Solskjaer'.

However, AC Milan's announcement on Tuesday night that Pioli had been given a two-year contract extension was far more shocking than Manchester United's decision to make Solskjaer their permanent manager last year.

After all, the Rossoneri had already lined up their next coach: Ralf Rangnick.

The man behind Red Bull's football empire was to be their Jurgen Klopp; a charismatic German coach who champions intense pressing and a flat back four, with a well-earned reputation for identifying young talent and improving players.

Milan's chief revenue officer, Casper Stylsvig, had even admitted that the Italians had been inspired by Liverpool's resurgence since hiring Klopp in 2015.

"We have been talking to them because they’ve been down the same path we're going through now," Stylsvig told The Associated Press.

"Four, five years ago, no one considered Liverpool and see where they are now. They obviously play very attractive football.

"They are winning, they have a fantastic manager, a fantastic team and now they are following suit from a commercial perspective.

"It has taken time, but their model seems to work."

Milan have instead decided – suddenly – to follow United's lead, only in even more dramatic fashion. Indeed, it feels a bit like they've ditched Klopp to stick with Solskjaer.

Of course, it's not necessarily the wrong call; just an incredibly surprising one.

After all, the decision made by Milan CEO Ivan Gazidis to pursue Rangnick without first consulting either Zvonimir Boban or Paolo Maldini – who were running the sporting side of the club – provoked a civil war at San Siro.

Boban quit in disgust, accusing Gazidis of being "disrespectful", "inelegant" and betraying "the Milan style", while Maldini was expected to follow his former team-mate out the door at the end of the season.

Indeed, the latter subsequently slated Rangnick for going public with his talks with the club while he and Pioli were still trying to salvage a season that had started dreadfully for the Rossoneri.

Tuesday's news, then, is a colossal victory for both Maldini and Pioli.

The former was justifiably criticised for Marco Giampaolo's disastrous reign, which was curtailed after just seven Serie A games, but he now deserves immense credit for turning to Pioli.

The iconic defender also pulled off a couple of masterstrokes in bringing in Zlatan Ibrahimovic and Simon Kjaer during the January transfer window.

Most of the plaudits for the Rossoneri's renaissance must go to Pioli, though. He has done an exceptional job in extraordinary circumstances.

After lifting the spirits of a squad sitting 13th in the Serie A table, he then had to deal with the effects of the Covid-19 outbreak and incessant speculation surrounding his future.

Milan's results, then, cannot be considered anything but sensational.

They have picked up 38 points in Serie A in 2020 – only Atalanta (43) have claimed more – while the Rossoneri have scored more than a goal in nine games in a single season for the first time since 1964.

Since the resumption of play in Serie A last month, Pioli's men are undefeated, winning seven of their nine fixtures, and routing Juventus and Lazio along the way.

At the time of writing, Milan are fifth in the table and guaranteed a place in the qualifying round of the Europa League.

The impressive improvement in results is essentially down to the improvement of the players. Ante Rebic, Hakan Calhanoglu, Ismael Bennacer, Franck Kessie, Theo Hernandez and Rafael Leao have all benefited from Pioli's arrival at Milan.

And given he has never won a major trophy, Tuesday's renewal ranks as the greatest triumph of his coaching career.

As the front page of Wednesday's Gazzetta dello Sport read, "Pioli won!" Tellingly, the paper also added in brackets: "And Ibra too..."

The Swede has had a massive impact since returning to San Siro midway through the season.

As he joked in characteristically arrogant fashion recently, "If Milan had had me from the start, we would have won the Scudetto!"

Ibra's influence hasn't just been felt on the field, though. He's been very active off it and has made no secret of his dismay at how the club is being run by Gazidis.

He even confronted the former Arsenal chief executive in front of the rest of the squad before the Coppa Italia semi-final against Juventus last month.

"I spoke for me and for the team," the 38-year-old forward told the Gazzetta. "I needed to have some explanations on the future, both mine and Milan's.

"I said that this is not the Grande Milan I once experienced."

Nobody, then, was more surprised to learn on Tuesday night that Pioli would be remaining as coach, with Ibra quipping, "You learn something new every day at this club."

It will now the fascinating to see if Pioli's extension brings an end to the uncertainty at San Siro, given Maldini is also now set to stay.

He has a close relationship with Paul Singer, the founder of Elliott Management, which owns Milan, but the South African's Rangnick revolution has been ended before it really began.

Depending on your viewpoint, he should either be commended for belatedly conceding that Pioli is the right man for the job; or criticised for failing to have the courage of his convictions by abandoning the Rangnick project.

According to reports, Gazidis still wanted to make Rangnick Milan's new technical director but the German declined the offer, given he had been previously promised full control of the club. Such stories will do little to dispel the ongoing doubts over the former Arsenal man's judgement.