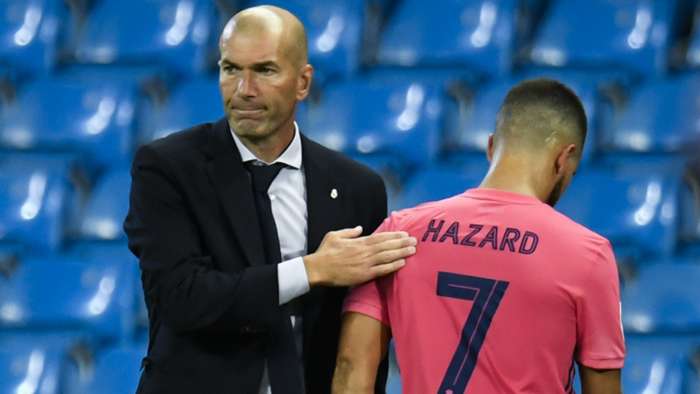 Real Madrid crashed out of the Champions League at the last-16 stage for the second year running. And it was entirely their own fault, again.

In the end, Pep Guardiola’s side had to be content with a 2-1 win, 4-2 on aggregate, but they made the newly-crowned Spanish champions look like amateurs. Madrid gave away the ball in front of their goal so frequently that it looked like they were trying to lay a red carpet route to goal for the Premier League side.

Los Blancos handed City their opener on a silver platter. While analysts figured Eder Militao might be the weak spot in Zidane’s backline, it was his centre-back partner Raphael Varane who made a crucial error, the first of many.

The French centre-back, usually so composed, dilly-dallied in the box before Gabriel Jesus pressed him and won the ball back, squaring for Raheem Sterling to tap home in the ninth minute.

Thibaut Courtois, who has also been crucial for Madrid this season, put Varane under pressure with his pass but a man of the World Cup-winner’s calibre and class should have dealt with the problem effectively.

Suspended Real Madrid captain Sergio Ramos watched on nervously from the stands, trying to orchestrate the defence with shouts, whistles and gestures, keenly aware that without his contribution the team is missing a key ingredient.

That was his own fault, having been shown a red card in the 2-1 defeat by City at the Santiago Bernabeu in February, as Madrid collapsed and allowed Guardiola’s team to come from behind.

Madrid’s performance here carried directly on from that, as if the past five months had never happened.

It was that of a side who has not played for three weeks, compared to City’s two, but perhaps also of a team drunk on its own success, who thought they could come to Manchester and not be pushed to the limit.

Madrid won 10 games in a row to lift La Liga, drawing only their final match after they had banked the trophy, but City were always going to prove a different challenge to what they had faced in Spain.

Zidane’s side ground out those victories but to succeed in Manchester they needed something special, which is why Eden Hazard was given a start on the left.

The former Chelsea winger has not been anything like his past self this season, hounded by injuries, and this was another blunt-edged performance, far from his best.

Benzema, by contrast, has been sublime this season and, after missing his first good opportunity, made no mistake with his second, heading home Rodrygo Goes’s cross to level on the night.

The Frenchman has carried the banner for Madrid but this time he didn’t get enough support behind him.

Casemiro, Militao and Varane, especially, seemed hell-bent on giving the ball away, while Courtois spilled one shot into the danger zone and was nearly caught out by compatriot Kevin De Bruyne from a corner.

Madrid seemed to be relying on the intangible magic which often accompanies them in Europe, and with the scores level it seemed like they might still somehow go through, despite City’s dominance.

But another Varane error put paid to that, as he made a hash of a long ball forward and sold Courtois short as he tried to send the ball back.

They didn’t come close to getting one. Zidane sent on Luka Jovic and Lucas Vazquez, ahead of the live-wire Vinicius Junior, which was a puzzling decision giving the circumstances. Gareth Bale, meanwhile, was in Spain after Zidane's claim that he had asked to be left behind.

Varane will take the blame for his two obvious mistakes which led to City’s goals, but nobody in the team could hold their head up high.