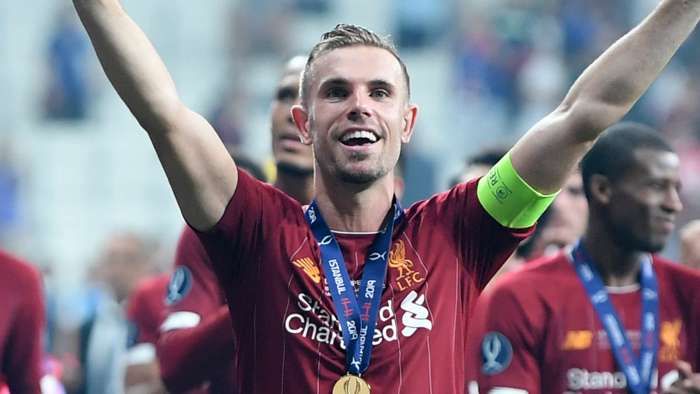 Jurgen Klopp believes Jordan Henderson is now “a role model for future Liverpool captains” – as he confirmed the Reds skipper WILL lift the Premier League trophy despite his season-ending injury.

It means he will not be on the field for the game with Chelsea at Anfield on July 22, when Liverpool will be presented with the Premier League trophy for the first time.

Klopp, though, says Henderson will be there to lift the trophy – even if his trademark ‘shuffle’ is not on display.

“We will do everything possible to do it the right way,” he told reporters. “I have no idea what the rules are, if you cannot lift the trophy if you are not in the starting line-up or whatever? That is not a rule? OK, so Hendo will be there and he will wear the match kit, and everything will be fine.

“It was a big relief that the injury is not as serious as we first thought. He deserves to lift the trophy for what he did in the last years. But life is like life is. If he would have had surgery and been in hospital, then it would have been difficult. But he is not. His rehab starts immediately, he will be fine in a few weeks.

“We will find a solution where we can show the respect he deserves. They the players all want that, by the way. They want him to be there.

“That was one of the first things I heard after we won the league. Virgil Van Dijk told Hendo he could do ‘the shuffle’ again! I’m not sure if he will be able to do the shuffle now, but that is the smallest problem of all!”

Henderson’s rise as Liverpool skipper has been remarkable. Having had to fight for acceptance in the early years of his Reds career, he has now captained the side to European, World and Premier League glory, putting his name alongside some of the all-time legends at Anfield.

“He is absolutely,” Klopp said. “He is the only captain I had here at Liverpool, and I am happy that this was decision was made before I came in.

“It’s always the same way in life, people have to grow in new roles. He had to do that. It was the most difficult job you can have. After Stevie Gerrard, whatever manner the person doing the job did it, it was going to be difficult.

“Hendo grew in that role, and now he is probably a role model for the next generation of Liverpool skippers. That’s absolutely great and it is nice to be part of this development.

“He became a man, age-wise, and he became a proper captain. That’s exactly how it should be, and on top of that he improved. He was always a good player, but he made big steps in his game as well.

“And when you are massively under pressure from outside, with big expectations, that is not easy to do. He achieved that, and after his career when he looks back, there are a lot of reasons why he should be proud.”