‘£50m for a full-back will become the norm’ – Wan-Bissaka must ignore Man Utd fee, says Irwin

‘£50m for a full-back will become the norm’ – Wan-Bissaka must ignore Man Utd fee, says Irwin 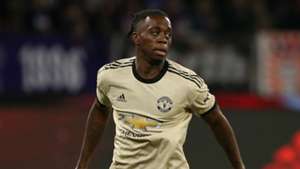 Aaron Wan-Bissaka has been urged to ignore the fee that Manchester United invested in his potential, with Denis Irwin claiming that "?50 million for a full-back is going to become the norm".

The Red Devils have spent big acquiring the services of a highly-rated 21-year-old .

Just one full season was spent within the first-team fold at Crystal Palace before Wan-Bissaka was lured to Old Trafford.

His price tag means that added pressure has been lumped onto his young shoulders, but Irwin believes that the talented right-back will cope and shift attention away from his asking price.

A man who once filled a full-back berth at United said in the Evening Standard of Wan-Bissaka and the Red Devils' focus on landing players of promise: "He is very quick, a modernday full-back in the fact that he was a winger and has played very, very well in the 15 months that I have seen him at Crystal Palace in a defensive role.

"There is a lot more pressure on him now, but hopefully he will be able to handle that. We needed a bit of pace and youth in the team.

"He and Dan James seem quite humble. I have noticed that in and around training and they seem quiet.

"There is nothing wrong with that, they will keep their heads down and work hard because they have a big opportunity now here to play for one of the biggest clubs in the world and they have got to love that.

"You have got to ignore the fee. I think ?50 million for a full-back is going to become the norm."

Wan-Bissaka is adamant that he will not allow the price on his head to become an issue , with the youngster determined to let his football do the talking.

He has said, with United currently in Australia on pre-season duty: "I expected it [pressure] when I came here. It is a big club. I wouldn't be here if it wasn't for Crystal Palace, so the attention will always be there. I just need to play my game and block it out.

"I wanted to take my development to the next level and this was the team where I thought I could do it.

"The style of play, the way they work, the intensity - that is going to develop me as a player. I always want to be pushed to reach my potential."