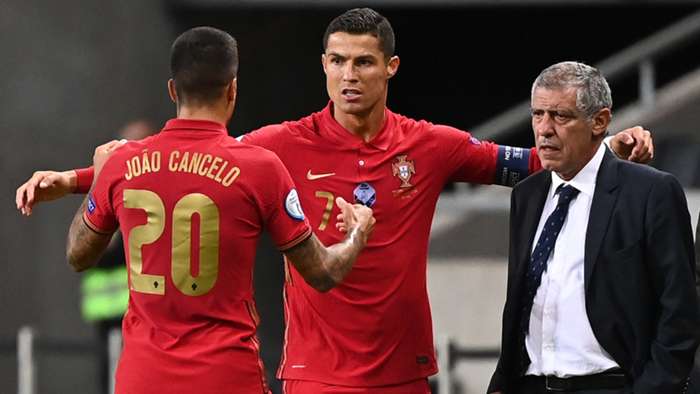 Cristiano Ronaldo revealed his delight at his 100th and 101st Portugal goals on social media on Tuesday.

Ronaldo scored a brace against Sweden in a 2-0 away Nations League win.

At the same Stockholm stadium where the forward scored a hat-trick in 2014 World Cup qualifying, his first was a stunning free-kick to bring up a century in international football.

Ronaldo was not done there, though, and curled in a fine second, with Ali Daei's record tally of 109 goals for Iran within his sights.

The Portugal captain posted on Instagram: "Huge pride in this historical goal for our national team!

Ronaldo's Portugal team-mate and Manchester United star Bruno Fernandes was full of praise for the 35-year-oldafter Tuesday's game, saying that the veteran can still make the difference in any match.

"We know that with Ronaldo it is easier to reach the goal," Fernandes said. "He has a nose for goal and can solve a game at any time.

"That was what happened before half-time, in a free-kick situation. Just yesterday he had six or seven like that in training and today he did the same.

"It's great to have Cristiano. He makes any team stronger."

Portugal's Nations League campaign has got off to a flying start as they attempt to defend the title they won in the inaugural competition in 2019.

They are sitting top of Group 3 in League A, with the Sweden victory and a thumping 4-1 win over Croatia on Friday earning the maximum of six points on offer.

France have also won both their matches against Sweden and Croatia but are ranked behind Portugal with two-less goal difference.

The two European powerhouses will meet in a top-of-the-table clash on October 11 in Paris.